We were lucky enough to work with local architects Marshall & Kendon who assisted us in developing our stunning, high-end suites. We got in touch to find out a little bit more about what they do and how they helped with the transformation >>

''It’s always nice to be rung by someone who likes your work; all the nicer as it doesn’t happen very often. All the nicer still when they want you to do some work. Rachael Gifford rang, kindly saying how much she liked the Clifton Lido and could we help to do something like that for Quarter. Only without the pool. But including the dusty old listed building. Or in this case two, side by side on the corner of Berkeley Square, both long and sadly empty, slowly accumulating a valuable carpet of pigeon guano and with each successive winter, shedding a few more lumps of Georgian plasterwork.

Both buildings were Listed Grade 2*, like the Lido, and although they hadn’t  deteriorated quite so badly, nor lost so many of their features, both had that elusive charm of dereliction, dust motes dancing in the sunbeams that filtered through the security shutters, hardboard floors curling like pieces of the Bilbao Guggenheim and weird patterns in the dense black mould that marked several years of leaking gutters. Not to mention the collapsed celings and all sorts of horrors in the windowless bathrooms at the back.

But dereliction is no mask of splendour; fine furnishings and wide screen TV sets can easily distract from the quiet elegance of a well made interior, but in the gloom of a winter afternoon there was no disguising the splendour of No 19 Berkeley Square’s 12 ft ceilings and elegant stair, the latter a perfect example of the apparently gravity-defying construction known variously as a hanging or cantilever stair.

Both incorrect incidentally; a bottle of whisky to someone who can concisely label this ingenious form of construction. Not so long ago, we couldn’t build new ones because the engineers couldn’t prove the calculations. Even though countless examples existed and had done for centuries. Led by Price and Myers, the structural engineers finally caught up, or perhaps it was the software that did. We did one recently and it still makes you wonder how it stands up.

Rachael wanted ‘serviced apartments’  which are a sort of smart flat where someone else does all the tedious stuff like cleaning and laundry, leaving you free to do what you do best; watching football, mixing cocktails or loafing about on very generous sofas. Actually that is a pretty suitable use for such grand former dwellings, far better than offices, although you would sometimes wonder given the difficulty of persuading  Bristol City Council.

We didn’t know much about serviced apartments but we do know a bit about old buildings and Quarter knew pretty much what they were trying to create even if not exactly how. That tends to make it quite a fun process although it invariably takes much longer than your client can imagine, a fact somewhat compounded by the planners. But there is really no way to rush the process since it depends as much as anything on an accumulation of knowledge of and familiarity with the buildings and the possibilities they embody. As the process advances  iterations adjust  and enrich the emerging proposal until finally something emerges which may or may not be a recognisable descendant of the original ideas. In this case, quite close, albeit arrived at by many and varied paths.

In many ways it is a good starting point to try to make the most of everything you are given, especially in a Listed Building where you will certainly be criticised if you don't. But even where there is no such constraint, the urge to start afresh is paradoxically confining, merely giving a proliferation of unknowns within which to find a way.

No 6 Berkeley Crescent is the easternmost of six in a tightly curved facade, the interior geometry wierdly distorted  by the constraints of the crescent. It has, however, the wonderful flexibility of the flat-backed Georgian terrace house; no wonder many architectural historians consider it Britain's greatest contribution to world architecture. Far better than any landscape garden, which is just a waste of good farmland if you want my view, but that's another matter. Though dusty and neglected, the interior of Berkeley Suites was largely intact, with all the key features, windows, shutters, plasterwork and the delightfully skewed stair and its beautifully inlaid handrail all present and more or less correct. And added to this were the delightful possibilities for apartments looking out over the diminutive and rather neglected crescent garden, its diameter edged with a variety of ducts and assorted additions to the roofs of various fast food outlets below. Give it a few years and that charming little garden, now nicely mown and spruced up, really will be somewhere special to take your cocktails as the evening sun goes down behind the hill.

If you can get up off the sofa that is.'' 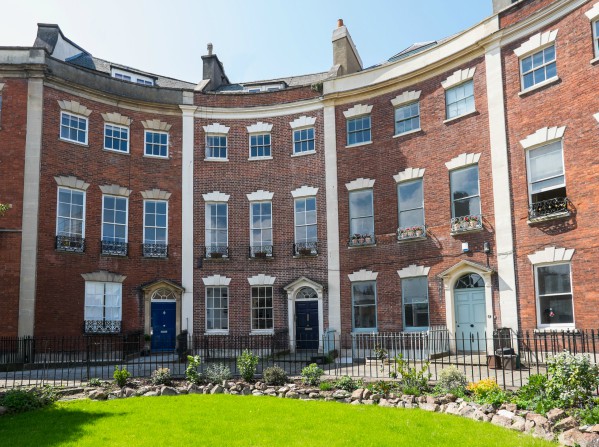 Experience the Berkeley Suites for yourself - book now.