I was asked to write a guest blog about how my paintings for Quarter came about, so this is what I wrote:

The philosopher and founder of Quarter, Hilary Lawson, is one of my closest friends, he has followed my journey and quest to be an artist from the beginning. When we met I was 24 and forging a career in media, but pursuing my art with a passion hoping someday I could be an artist full time. Then when I was 25 I quit media after being shortlisted for the BBC Production Trainee Scheme and not making the final cut, I thought it was a sign that I was not destined for a career in media and that I was meant to be an artist. I enrolled at Chelsea School of Art and embarked on my degree course in Fine Art, but by the age of 26 I had landed my first solo show on Dray Walk off Brick Lane and was included in the 000 exhibition at the Whitechapel Art Gallery. Chelsea School of Art was an uninspiring experience and I dropped out in my second year, set up my own company Pigment Explosion and just went for it. 1999 was the year of Asian cool; it was an exciting time. At the exhibition on Dray Walk I exhibited new abstract paintings, I was experimenting with encaustic and pigment. Hilary came to this show and instantly liked them and Quarter subsequently bought some of these blue paintings for The Clifton Hotel. I was also involved in an exhibition in Bristol, too. In fact I was doing so many shows at that time I couldn’t keep up, producing new work at a terrific rate. At another Soho exhibition some of my abstract paintings featured and again Hilary bought some. So this is how my relationship with Quarter started, it was very gradual and organic.

Acrylic, encaustic and pigment on canvas paper- THE CLIFTON HOTEL

Following this I was told that The Berkeley Square Hotel needed paintings. I created a series of pigment blues and pigment reds, in batches of 30. Making these paintings involves a lot of energy and concentration there is room for error and if the mark is not pure and uninhibited the painting does not work. Using raw pigments is messy and toxic, too. I was making many of these paintings at the time, I find abstract painting liberating. They are very different from my more classical and traditional works, if you look at the pigmentexplosion website you will see a plethora or styles but there is a consistent pattern in terms of how I work. I always make series of paintings, sometimes 100s in the same style. For example I am currently doing a 1000 postcard and 1000 painting series with my children. It’s how my brain works. 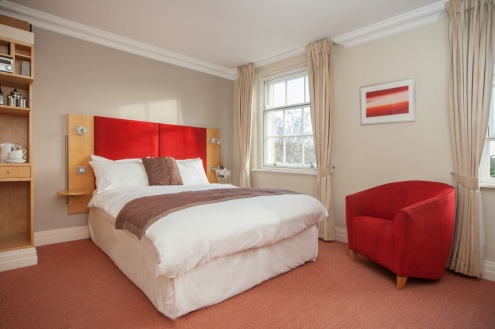 Acrylic and pigment on canvas paper - THE BERKELEY SQUARE HOTEL

Out of the 100s of paintings there are maybe only a handful of gems. What constitutes a painting that works? It’s about equilibrium, the play of colours, the right balance between light and dark. Adding the wax can be tricky, if it doesn’t fall in the right way the painting looks clumsy, it needs to be effortless. These paintings are very delicate, easily damaged, but the fragility combined with the strength of the colours makes them visually appealing and arresting.

Acrylic and pigment on paper - THE BERKELEY SQUARE HOTEL

Some people dismiss abstract painting, or they just don’t get it, but for me they mirror real life more than representational work. Abstract paintings are the closest you get to depicting the interior world and mine is a colourful one with audacious colours.

Of course over the years my work has evolved and I started to experiment on MDF blocks (which are no longer produced sadly), so these works are very precious since it is not possible to make them anymore. I was very drawn to these blocks; they were solid, robust, self-contained. I began to experiment using them as a base for abstraction. I saw them as blank pieces of universe that could suck the viewer in to another parallel world. 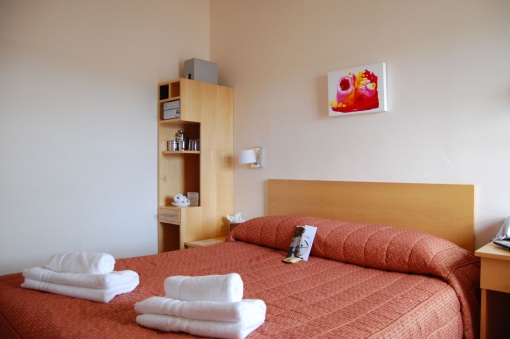 When Quarter approached me to create more paintings, this time for The Rodney Hotel I suggested doing new works for them, even though the blocks were more expensive than the framed works, I thought they would add a different ambience to the rooms. I recall all 30 blocks lying on the studio floor and feeling intimidated, again if you mess up you cannot correct them. I attacked the blocks, it was quite violent the process of making them, I had to work very fast; the medium is fluid and unpredictable. Using acrylic inks; you never know which way the ink is going to turn or how it will behave. It can be nerve wracking. When I finished them I remember leaving my studio feeling rather sick not knowing how they would look when they were dry. I returned some days later full of trepidation, but was relieved to see a cacophony of colour dancing on my studio floor. It was like alchemy. This is why I adore being an artist; it is utterly unpredictable.

Seeing the paintings hanging in the rooms is very gratifying, Quarter have been supportive of my practise as an artist and we continue to collaborate.

As a result of these commissions, Sebastian Rochford from the Mercury Prize nominated group Polar Bear contacted me and asked if I would design his album cover. He told me that he couldn’t forget the painting he saw hanging in the room he was staying in at the Berkeley Square Hotel. That’s the power of art; it can get under your skin and stay with you forever.